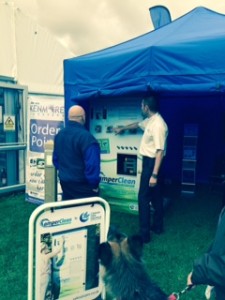 Camperclean by CPES was launched at the Lawns Caravan Show at Cottingham near Hull in early September with a great response from the public who were extremely enthusiastic about the product and were keen to know when parks would be introducing this facility. Park operators were equally impressed and we have started to see orders being placed now ready for the 2016 season. The product was demonstrated throughout the event and literature handed out to both caravanners and the trade alike.